Mother Mu buys brother a car in a time of need

A class of brothers from Mother Mu went out of their way to help a brother in need.

Mike Slaughter, Alabama ’77, was in a financial bundle, and his brothers he’s known since his time as an active SAE came through for him, buying him a 2004 Dodge Ram.

“It was a wonderful thing that they did for me. It shows you what they can do for you, even 40 years later. The True Gentlemen is still out there,” Slaughter said.

Bryan Christopher, one of Mike’s pledge brothers, helped start the process of raising money for Mike’s cause.

“Mike was one of, if not the most, well-liked pledge brothers in our class of 26,” Christopher said. “Our pledge class training was focused on building a strong bond within us and the important history of our chapter and the principles of being a True Gentleman.”

Mike hasn’t lived the easiest life after a 10 year period of alcoholism and rehab. Like the Phoenix from the ashes, Mike rose and turned a negative part of his life into a positive.

Today, he’s a retired therapist and drug education mentor for juveniles but started a landscaping company, Greenman Landscaping and Design, in 2018.

“A few years after college Mike had entered a path of self-destruction and burned many bridges, took advantage and abused many of his brother’s friendship and bond,” Christopher said.

Bryan heard Mike was back in his hometown of Dothan, AL in 2018 when they rekindled their friendship like old times. 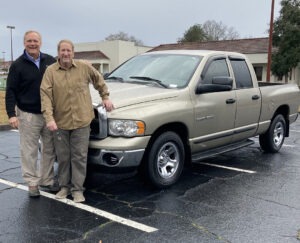 “I started stopping by to visit him and just like old times we were united again. I could see Mike was working hard in his landscaping business and he would not stop asking questions about everyone else in our pledge class,” Christopher said.

Needing a way of transportation became a problem and his brothers from the pledge class of 1975 came through for him, donating $7,000 to help him purchase his truck.

Christopher was the leader in contacting all the brothers from their pledge class and begun raising money for a vehicle.

“He would push his equipment himself to his jobs,” Christopher said. “I sent out a request for donations to our pledge class brothers to help get Mike a truck assuring them that Mike had turned the corner in his life and was on solid ground again. The checks just started flying in.”

Four months later, Christopher and the rest of the pledge class presented the truck to Mike.

“Mike was so thankful and happy to know his pledge class still cared deeply about him and we all certainly do,” Christopher said.

These events have led to a reunion this fall at the Alabama Mu house to celebrate what they call the ‘Best Class Ever’.

“100 percent of our pledge class recently purchased a brick at the house to commemorate our class,” Christopher said. “We have had a 95 percent positive response to attend our reunion. I predict it will be 100 percent when the time comes around. To say our group is exceptional is simply an understatement. Our bond is unbreakable.” 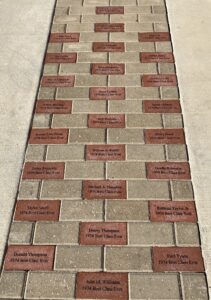 Mike will always remember there are tough times and it can get dark. Even so, there is a light at the end of the tunnel, just this time the light was his brothers.